The United Church of Canada introduced Creation Time in the Season of Pentecost in 2010.  From September to Thanksgiving, congregations celebrate the fact that creation is an integral part of the whole Christian year. The “tree” logo was designed for this occasion and orange was selected as the corresponding liturgical colour.

Flowing within and outside the Elm tree is a blue Circle, a symbol of God’s eternity. It is blue, the color of the sky and heaven and symbolic of wisdom and clarity.  A Cross of gold (worth, splendor, wealth and Jesus’ ‘royalty’) fills the Circle, both within and outside the Tree. It is an alisee patee cross, recalling the consecration cross of the very ancient church and thus the holiness of life. It also reminds us of a Celtic cross whose spirituality maintains the intricate link between humanity and nature. The square at the intersection of the cross recalls God as Mystery. The four colors also represent the four elements of creation: earth /brown, air /white, fire /orange and water /blue.

The colour orange was: 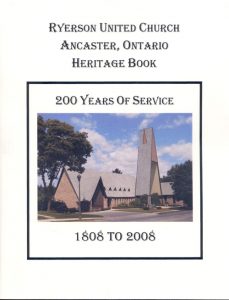 On the 200th Anniversary of Ryerson United Church Ancaster, we celebrated by publishing a limited run book of our history, entitled "200 Years of Service, 1808 to 2008".